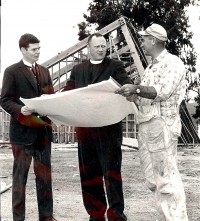 St. Dunstan’s originated as a mission church. Like so many congregations with humble origins, its members met in borrowed community facilities, sitting on folding metal chairs in the company of a buzzing Coke machine. It was 1955.

The fledgling church was named for St. Dunstan, so honored because Dunstan was an illuminator, musician and silversmith-jewelry maker, and Carmel Valley is noted as a center for the arts. It remained a mission church for the next 14 years, when it became self-sufficient. The exciting prospect of building a church for St. Dunstan’s became a reality when construction began in 1962. In the years since, the campus has expanded to include multi-purpose spaces, offices, a kitchen, a Montessori school and playground, a columbarium, and a labyrinth. The crown jewel of the sanctuary was set with the 2015 installation of Opus 94, a magnificent pipe organ designed and built especially for St. Dunstan’s.

St. Dunstan’s is older than the diocese to which it belongs. The Diocese of El Camino Real was part of the Diocese of California until 1980. It is named after the Spanish colonial road that ran from Mexico City to Oregon. The Episcopal Diocese of El Camino Real is as vibrant and diverse as the region it serves. The diocese spans 42 congregations across five counties: Santa Clara, San Benito, Santa Cruz, Monterey, and San Luis Obispo. (Learn more at realepiscopal.org)

Share this page: Our Beginning
Welcome Everyone Needs a Place Who We Are Clergy & Staff The Vestry Calendar E-News Our Beginning
View Entire Post

Join us Sundays for the celebration of the Holy Eucharist at 8 am & 10 am, and Wednesdays at 10 am.

You can also watch a livestream of our 10 am Holy Eucharist, revisit homilies and past weeks’ worship on our YouTube channel.

You can still read or watch or listen to past sermons here.

Welcome to St. Dunstan's! We are a growing and vital Episcopal congregation of the Diocese of El Camino Real, and a member of the Anglican Communion. If you are seeking a new faith community, a place of belonging, or the opportunity to grow your faith in study and action, we hope you will consider St. Dunstan’s!

Sunday mornings at St. Dunstan’s is the time when the community gathers together to worship and praise God! Services of Holy Eucharist happen at 8am (Rite II, no music) and at 10am (Rite II with organ & choir), followed by coffee and connection! We also gather on Wednesday mornings for a more intimate service with conversation, reflection and communion. Any time you are unable to join us in person, head on over to St. Dunstan’s Live, where you can join us for our 10am service, live-streamed on YouTube. You’ll also find our latest sermons and past services on our St. Dunstan’s Episcopal Church Carmel Valley YouTube Channel. And, once a month we gather for Church for All Generations — a time of theme-based fellowship and activities for all ages!

You can still watch or listen to past sermons here.

We value: Community, open hearts, open minds, open arms. Faith. Fortitude. Staying current, but equally staying rooted in tradition. Reason and honesty. Civic responsibility. Debate that allows for mutual respect. Music and beauty for their own sake. Joy in God’s creation. Anyone who makes an effort to get to know and follow Jesus.

St. Dunstan’s is located on the spectacularly beautiful Central Coast of California, in Carmel Valley. Our church and school are in Mid-valley, just six miles inland from California Highway 1, and 5 miles west of Carmel Valley Village.